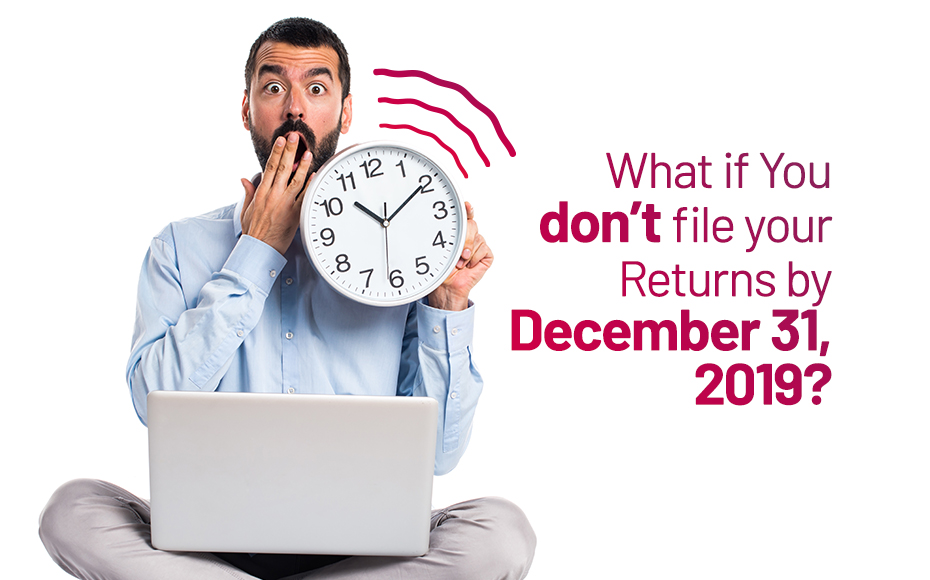 It is a red alert for the salaried persons taxable under the Income Tax Act. The final date for ITR filing has been decided and December 31, 2019 would be the last date to do so. This article familiarizes you with the necessary information you should have about ITR filing and the penalty charges of non-filing of ITR.

Who has to File ITR?

According to the Income Tax Act of 1961, Section 139(1) illustrates that any individual whose total income in the FY exceeds Income Tax exemption limit of Rs.2.5 lakh for the FY 2019 is liable to file ITR. Additionally, any private or public company based out of India or undertaking business in India, Firms, Hindu Undivided Family (HUF), Association of persons (AOP), Body of Individuals (BOI) etc. are also liable to declare net profit or loss of the year and pay their tax liability by filing ITR.

Can Previous Years’ ITR be filed?

The Government expects the taxpayers to file ITR in the respective Financial Years. The Finance Act 2016 amendment has passed a rule regarding belated ITR. Taxpayers can file ITR anytime on or before one year from the end of a relevant Assessment Year (AY). AY is the year immediately succeeding the FY for which ITR is to be filed. For example, if a taxpayer has to file ITR for the AY 2018-19, the last day for filing the delayed return would be March 31, 2019 i.e. the AY of the FY 2018-19 will be 2019-20.

If you have missed the filing of returns for the FY 2017-18, following are the policies under which the IT department can charge you penalty of delay request:

• Request the permission from Income Tax Authorities or the IT Commissioner for filing ITR by stating the reason for delaying the ITR
• If you have missed the ITR filing for a particular year, it can be done within a time period of 6 years from the end of AY for filing the return
• Even if you have not filed your ITR for FY 2017-18, you will be liable to pay the tax along with the applicable interest according to Section 234A, 234B or 234C
• As per Section 271F, the Income Tax Department can issue notice even if you have paid taxes but missed to file returns
• The IT Department can legally take action against you, prosecute or on the worst side imprison you for not filing returns even after issuing notice or penalizing
• On receiving a notice issued by IT Department, it is necessary that the taxpayer responds through the IT E-filing portal for filing the ITR that meet the terms in the notice
• For taxpayers who have under-reported or misrepresented their income, a 200% penalty of tax payable shall be applied

It is very important that taxpayers take the ITR filing critically and do the filing procedures compulsorily before August 31 of every FY.

What are the Penalty Charges for late ITR filing?

For those with low income turnover not exceeding Rs.5 lakh, the maximum tax the person is liable to pay if Rs.1000.

What should be done for Late Payment notice Issued by Income Tax Department?

The Income Tax Department issues a late payment notice for the non-filed ITR that dates back to 2 FYs. The taxpayer has to log in to the Income Tax web portal to organize your returns and the print out of this need to be submitted to the Income Tax office where the report should be filed.

Earlier the taxpayer used to file old returns as the response for the Income Tax notice issued. Presently, if the taxpayer has to send a revised return (rectifying omission, error etc.) to be made in the original return, it has to be done on/before the end of the relevant AY. This amendment has come in to effect from AY 2018-19. Till AY 2017-18, the limit was one year for filing revised return from the end of the relevant AY.